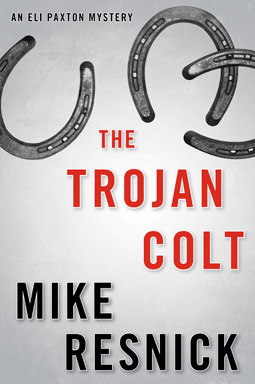 A multimillion-dollar plot and a perpetrator who will kill to keep it secret.

What starts as a routine security assignment turns out to be anything but for down-on-his-luck private eye Eli Paxton. Hired to guard the high-priced yearlings of "Trojan," a recently retired classic winner in Lexington, Kentucky, Paxton is no sooner on the job than he must respond to a fracas in the horse barn. Rushing in, he's just in time to thwart a vicious attack on a young groom. The assailants get away, leaving the groom bloodied and too terrified to talk. The next day he doesn't show up for work, and the Trojan colt that was in his keeping sells for a record price.

Now assigned to investigate the boy's disappearance, Paxton focuses on the Lexington breeding farm. It turns out that two other staff members have disappeared in the past couple of months. And the owner of the farm, while denying it, appears to be in financial straits.

As Paxton worries that all three missing boys may never be found, he runs smack into a multimillion-dollar plot that the perpetrator will kill to keep secret.

"Entertaining.... Lighthearted, but with a solid mystery, the book showcases Resnick's ability to tell stories economically and to create characters who feel real enough to step off the page."

Praise for Dog in the Manger:

"[This] engrossing puzzler... captures the essence of the antiheroic PI."

"I did something I rarely do these days-I read it in a single sitting. I think you'll do the same."

"A crisp, fast moving, and fully engaging story in the Sam Spade tradition."

"Fast paced and action packed, Resnick's Eli Paxton Mystery delivers a cunning, high stakes tale while providing an inside view of the world of show dogs."

"[A] solidly plotted and amusing mystery featuring an engaging protagonist..."

-Stop, You're Killing Me!

"Eli Paxton is a likable addition to the ranks of fictional private eyes. Mike Resnick's fast-paced, cleverly plotted, wryly amusing adventures are sure to please both mystery readers and fans of his award-winning science fiction."