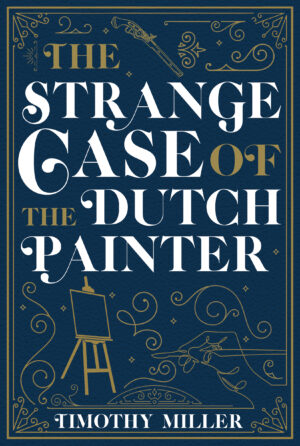 The Strange Case of the Dutch Painter

Paris, 1890. When Sherlock Holmes finds himself chasing an art dealer through the streets of Paris, he’s certain he’s smoked out one of the principals of a cunning forgery ring responsible for the theft of some of the Louvre’s greatest masterpieces. But for once, Holmes is dead wrong.

Officialdom pronounces the death a suicide, but a few minutes at the scene convinces Holmes it was murder. And he’s bulldog-determined to discover why a penniless painter who harmed no one had to be killed–and who killed him. Who could profit from Vincent’s death? How is the murder entwined with his own forgery investigation?

Holmes must retrace the last months of Vincent’s life, testing his mettle against men like the brutal Paul Gauguin and the secretive Toulouse-Lautrec, all the while searching for the girl Olympia, whom Vincent named with his dying breath. She can provide the truth, but can anyone provide the proof? From the madhouse of St. Remy to the rooftops of Paris, Holmes hunts a killer—while the killer hunts him. Timothy Miller is a native of Louisiana, and a graduate of Loyola University in New Orleans. He has directed and designed lighting for plays in New Orleans and Chicago. The feature film of his screenplay At War with the Ants won a Silver Remi Award at Houston’s Worldfest. His screenplays have placed in several contests, including five times as a semifinalist in the Academy’s prestigious Nicholl Fellowship. He has taught English in Milan and has written for the Italian design magazine Glass Style. When not mourning over his beloved New Orleans Saints, he is mourning over his beloved Chicago Cubs. His favorite superhero is Underdog.