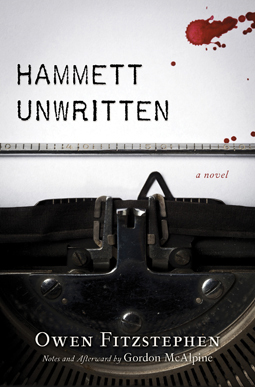 Notes and Afterward by Gordon McAlpine

Dashiell Hammett searches for the meaning behind the falcon statuette that haunts him in later life.

A worthless bird statuette—the focus of Dashiell Hammett's The Maltese Falcon. And much more.

As Dashiell Hammett closes his final case as a private eye, the details of which will later inspire his most famous book, he acquires at a police auction the bogus object of that case, an obsidian falcon statuette. He casually sets the memento on his desk, where for a decade it bears witness to his literary rise. Until he gives it away.

Now, suffering writer's block, the famous author begins to wonder about rumors of the falcon's "metaphysical qualities," which link it to a powerful, wish-fulfilling black stone cited in legends from around the world. He can't deny that when he possessed the statuette he wrote one acclaimed book after another, and that without it his fortunes have changed. As his block stretches from months to years, he becomes entangled again with the scam artists from the old case, each still fascinated by the "real" black bird and its alleged talismanic power.

A dangerous maze of events takes Hammett from 1930s San Francisco to the glamorous Hollywood of the 1940s, a federal penitentiary at the time of the McCarthy hearings, and finally to a fateful meeting on New Year's Eve, 1959, at a Long Island estate. There the dying Hammett confronts a woman from his past who proves to be his most formidable rival.

And his last hope.