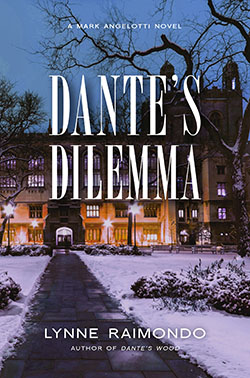 Psychiatrist Mark Angelotti has a physical disability—legal blindness—that complicates his fact-finding and forces him to rely on unique skills to solve crimes while acting as an expert witness or psychiatric evaluator.

Blind psychiatrist Mark Angelotti is faced with his most troubling case yet when he is asked to evaluate Rachel Lazarus, the estranged wife of a slain University of Chicago professor.

Months earlier, the professor’s body was found stuffed into one of the exhibits at “Scav,” the school’s world-famous annual scavenger hunt, and – in a feast for the press – missing a vital piece of its anatomy. Though she’s confessed to her husband’s murder, Rachel is mounting a battered woman’s defense.

Forced into helping the prosecution, Mark becomes unsure of his objectivity when his investigation uncovers uncomfortable parallels between Rachel’s history and his own. That concern proves well-founded when his damaging admission at trial all but convicts Rachel. Then a tip connects the case to another suspected murder and evidence that Rachel may not be guilty after all. As he plows ahead during a brutal Chicago winter, Mark soon learns he has far more to worry about than treacherous snow and ice: someone will do anything to guarantee that Rachel takes the fall.

“The writing is crackling good, the pace non-stop, the mystery top-notch intrigue. The best Mark Angelotti yet!”

“Raimondo’s remarkable series is not only compelling for its uncanny depiction of a blind man’s daily struggles, it ranks among the most intelligent and well-executed crime fiction in years. Deeper and more complex with each episode, this series commands attention.”

Praise for the series:

“[A] flawed, complex and courageous protagonist….An unusual but compelling detective.”

“Stunning…. One of the best mystery debuts since V.I. Warshawski solved her first case.”

“The books may not carry the physical heft of a Clancy novel, but the story is just as engaging…..”

“A smart protagonist and a mystery that keeps readers guessing for most of the story.”

—Library Journal STARRED REVIEW and Mystery Debut of the Month

“Angelotti’s smart-aleck tendencies and unswerving dedication to his vulnerable client—as well as an exciting climax—keep the reader turning the pages.”

“Raimondo’s wonderful writing brings the heart-stopping action to life, and she is just as accomplished at pulling the readers’ heartstrings…. I’m looking forward to…future installments of the series.”

“[A] terrific mystery starring a wise-cracking protagonist who uses self-deprecating humor as a defense mechanism…. The storyline grips the reader….”

“A taut, compelling, very moving debut novel that invites us into a murder, and into the life of a wonderful main character. This is an astonishingly accomplished and assured novel.”