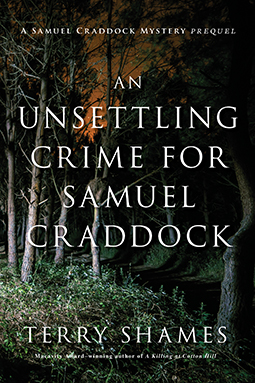 An Unsettling Crime for Samuel Craddock

When the Jarrett Creek Fire Department is called to douse a blaze on the outskirts of town, they discover a grisly scene: five black young people have been murdered.

Newly elected Chief of Police Samuel Craddock, just back from a stint in the Air Force, finds himself an outsider in the investigation headed by the Texas Highway Patrol. He takes an immediate dislike to John Sutherland, a racist trooper

Craddock’s fears are realized when Sutherland arrests Truly Bennett, a young black man whom Craddock knows and respects. Sutherland cites dubious evidence that points to Bennett, and Craddock uncovers facts leading in another direction. When Sutherland refuses to relent, Craddock is faced with a choice that will define him as a lawman—either let the highway patrol have its way, or take on a separate investigation himself.

Although his choice to investigate puts both Craddock and his family in danger, he perseveres. In the process, he learns something about himself and the limits of law enforcement in Jarrett Creek.

PRAISE FOR THE WORK OF TERRY SHAMES:

“Shames once again enchants with her portrayal of life in rural Texas. Each character has a unique personality that remains in the mind of the reader long after the book is closed. The stunning conclusion will surprise most as Shames deftly weaves her tale.”

“Shames does it again, providing the wise, likable Craddock…with yet another quirky mystery with a surprising ending.”

“If you enjoy your mysteries on the stylistic lines of Bill Crider and William Kent Krueger, and if you agree with Agatha Christie that you can know everything about the human condition from what happens in a small town, you’ll want to settle in to a good read with [this series.]”

Terry Shames is the author of A Killing at Cotton Hill, The Last Death of Jack Harbin, Dead Broke in Jarrett Creek, A Deadly Affair at Bobtail Ridge, and The Necessary Murder of Nonie Blake, the first five Samuel Craddock mysteries. She is the coeditor of Fire in the Hills, a book of stories, poems, and photographs about the 1991 Oakland Hills Fire. She grew up in Texas and continues to be fascinated by the convoluted loyalties and betrayals of the small town where her grandfather was the mayor. Terry is a member of the Mystery Writers of America and Sisters in Crime.