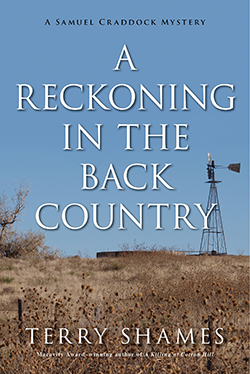 A Reckoning in the Back Country

When Lewis Wilkins, a physician with a vacation home in Jarrett Creek, is attacked by vicious dogs, and several pet dogs in the area around Jarrett Creek disappear, Police Chief Samuel Craddock suspects that a dog fighting ring is operating in his territory.

He has to tread carefully in his investigation, as lawmen who meddle in dog fighting put their lives at risk. The investigation is hampered because Wilkins is not a local.

Craddock’s focus on the investigation is thrown off by the appearance of a new woman in his life, as well as his accidental acquisition of a puppy.

Digging deeper, Craddock discovers that the public face Wilkins presented was at odds with his private actions. A terrible mistake led to his disgrace as a physician, and far from being a stranger, he has ongoing acquaintances with a number of county residents who play fast and loose with the law.

PRAISE FOR THE SAMUEL CRADDOCK MYSTERIES:

“Elegantly written and tightly constructed, An Unsettling Crime for Samuel Craddock is a compelling and nuanced exploration of race and justice.”

“Shames’s superior sixth Samuel Craddock mystery [An Unsettling Crime for Samuel Craddock]…a prequel set possibly during the early 1970s, explores a significant case at the start of the retired police chief’s career. Skilled depictions of the lawman’s formative choices and emotions enhance a timely story with resonance in the era of Black Lives Matter.”

“We know Samuel Craddock as an upstanding man dedicated to justice—but how did he become that man? In An Unsettling Crime for Samuel Craddock, readers get the origin story they deserve—and a riveting, timely mystery.”

“With a great plot and realistic, unforgettable characters, Terry Shames never disappoints. An Unsettling Crime for Samuel Craddock is a great read. This compelling novel of small-town Texas is full of twists and surprises that highlight the struggles of vivid characters. Shames puts you in the moment as few can, and once you are engaged with the novel, you don’t know whether to watch out behind you or to look forward. In response, you simply have to turn the page and keep going.”

“The lead’s folksy tone belies astute detecting, and the plotting will dazzle readers.”

“A gritty take on small-town crime.”

“An amazing read. The poetic, literary quality of the writing draws you into a small town and its interesting, secret-carrying residents.

“Following up on her stellar debut, Shames proves that she isn’t a one-hit wonder…. [Her] grizzled, world-weary Craddock is a nuanced and artfully drawn character who embodies the positive values of small-town Texas as he gets deeper into a multilayered story of trust and betrayal. Jarrett Creek is much more than a backdrop—it’s a complex character in the story. Samuel Craddock is a hero worth rooting for…. Highly recommended.”

Terry Shames is the author of A Killing at Cotton Hill, The Last Death of Jack Harbin, Dead Broke in Jarrett Creek, A Deadly Affair at Bobtail Ridge, The Necessary Murder of Nonie Blake, and An Unsettling Crime for Samuel Craddock, the first six Samuel Craddock mysteries. She is the coeditor of Fire in the Hills, a book of stories, poems, and photographs about the 1991 Oakland Hills Fire. She grew up in Texas and continues to be fascinated by the convoluted loyalties and betrayals of the small town where her grandfather was the mayor. Terry is a member of the Mystery Writers of America and Sisters in Crime.